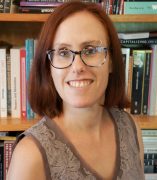 Claire Laurier Decoteau received her PhD in Sociology from the University of Michigan (2008). Broadly, her research focuses on the social construction of health and disease, the politics of knowledge production, and peoples’ grounded experiences with healing and health care systems. Decoteau has received numerous awards for her scholarship and teaching. In 2022, she was awarded the Lewis A. Coser Award for Theoretical Agenda-Setting from the Theory Section of the American Sociological Association. She has also received the Junior Theorist Award, the Robert K. Merton Prize, the Star Nelkin Award and the American Sociological Association’s Dissertation Award. Decoteau has also received two awards for excellence in teaching from UIC, as well as the 2018 Graduate Mentoring award.

Decoteau’s first book, Ancestors and Antiretrovirals: The Biopolitics of HIV/AIDS in Post-Apartheid South Africa (2013, University of Chicago Press) argues that it is through HIV/AIDS policy that the South African government attempted to balance the contradictory demands of postcolonial nation-building – forced to satisfy the requirements of neoliberal global capital and meet the needs of its most impoverished population.  Drawing on 30 months of ethnographic, discursive and historical research, the book traces the politics of AIDS in South Africa from 1994 through 2010 analyzing: the political economy of the post-apartheid health system, the shifting symbolic struggles over the signification of HIV/AIDS, and the ways in which communities profoundly affected by the epidemic incorporate culturally hybrid subjectivities, informed by both indigenous and biomedical healing paradigms.  This book was awarded three honorable mentions for outstanding book awards from American Sociological Association sections: Medical Sociology; Science, Knowledge and Technology; and the Theory Section.

Decoteau’s second book, The Western Disease: Contesting Autism in the Somali Diaspora (2021, University of Chicago Press) draws on three years of ethnographic and interview data and was funded by the National Science Foundation. The Western Disease analyzes the curiously high rates of autism among Somalis in Minneapolis and Toronto, and illustrates how Somalis’ experiences of immigration and racial marginalization play a prominent role in how they make sense of autism.  Somalis in both locations have forged epistemic communities, united around a unique theory of autism that challenges orthodox explanations.  The epistemic communities become a basis for mobilizing for resources and attention.  Centering an analysis on autism within the Somali diaspora exposes how autism has been institutionalized as a white, middle-class disorder, leading to health disparities based on race, class, age and ability.  But Somalis also ask us to consider the social causes of disease and the role environmental changes and structural inequalities play in health vulnerability. This is the first study of autism to explore the racial, class and national implications of autism etiology and politics. This book was awarded the 2022 Robert K. Merton Prize from the Science, Knowledge and Technology section of ASA.

Decoteau’s newest research project examines how public health metrics and state bureaucrats’ policy decision-making exacerbate race, class and legal disparities in COVID-19 infection and deaths. Drawing on interviews with federal, state and local policymakers and experts, as well as residents of three racially and economically disadvantaged neighborhoods in Chicago, this project analyzes the “racial equity” framework adopted by the state of Illinois and city of Chicago to mitigate racial disparities in COVID-19 outcomes and assesses its success, from the perspective of those most marginalized by race, class and legal status. Decoteau argues that COVID-19 represents and reifies the convergence of three sets of emergency: a state of emergency that protects white supremacy and wealth; the slow emergencies racially marginalized populations have faced due to the long-term gutting of care infrastructure and deindustrialization; and the sacrifice “essential workers” were asked to make to protect the US economy. Each of these three emergencies operate along distinct temporalities, invoke divergent politics of visibility, and are governed with unique strategies of exclusion.

Decoteau has also engaged in research on: 1) debates about the etiology of autism waged between dominant and heterodox autism experts in the Interagency Autism Coordinating Committee; 2) debates over the controversial link between childhood vaccinations and autism development within the US federal vaccine court proceedings on autism; 3) sex work and transactional sex in South Africa, where gift and commodity exchange become symbolic distinctions in an increasingly neoliberal economy; 4) the epistemic debates that were instigated by the release of the DSM-5; and 5) a series of theoretical and methodological pieces on multicausal explanation, Bourdieusian action theory, and critical realism.

Decoteau teaches undergraduate and graduate sociological theory as well as courses in the sociology of health and medicine.

Decoteau, Claire Laurier. 2017.  “The AART of Ethnography: A Critical Realist Explanatory Research Model.”  Journal for the Theory of Social Behaviour 47, 1: 58-82.

Webinar with the Critical Realism Network

This webinar begins by comparing and contrasting interpretivist, materialist and realist approaches to ethnographic data collection and analysis. It then argues that critical realism is an important (but underutilized) post-positivist tool for ethnographers. The webinar also suggests ways in which critical realism should incorporate insight from both grounded theory and extended case method to avoid essentializing actors’ motivations or reifying structural determinants.

“The Western Disease: Contesting Autism in the Somali Diaspora” (2021, University of Chicago Press)

“Ancestors and Antiretrovirals: The Biopolitics of HIV/AIDS in Post-Apartheid South Africa” (2013, University of Chicago Press)