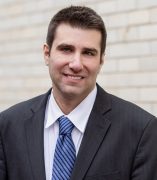 Aaron Gottlieb is an Assistant Professor at the Jane Addams College of Social Work at University of Illinois at Chicago (UIC). His research is motivated by the idea that our criminal-legal system is far too punitive. As such, his scholarship examines the causes and consequences of criminal-legal involvement, as well as the impact of policy and practice changes that would reduce the punitiveness of the criminal-legal system. In addition to being published in a wide range of academic journals, Aaron’s research has been cited in a number of media outlets, including the New York Times and the Atlantic. In the community, Aaron is active in working towards police accountability through community oversight. He was recently appointed to Chicago’s Police Use of Force Work Group, a working group that is tasked with producing recommendations about how to improve the Chicago Police Department’s use of force policies, and has also worked extensively on a civilian oversight ordinance that, if passed, would give Chicago community members greater input in public safety decisions than community members in any other city in the country.