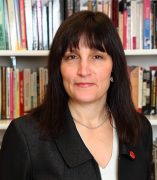 Amanda E. Lewis is the Director of the Institute for Research on Race and Public Policy and  College of Liberal Arts & Sciences Distinguished Professor of Black Studies and Sociology at the University of Illinois at Chicago. Her research focuses on how race shapes educational opportunities and on how our ideas about race get negotiated in everyday life.

She is the author of several award-winning books including, with co-author John Diamond, Despite the Best Intentions: Why racial inequality persists in good schools (Oxford University Press, 2015), and Race in the Schoolyard: Negotiating the color-line in classrooms and communities (Rutgers University Press 2003).  Her research has appeared in a number of academic venues including Sociological Theory, American Educational Research Journal, American Behavioral Scientist, Ethnic & Racial Studies, Educational Researcher, Anthropology and Education Quarterly, The Sociology of Race and Ethnicity, Urban Education and The Du Bois Review.  She has received numerous grants and awards including from the National Science Foundation, National Institute o Health, Spencer Foundation, Russell Sage Foundation, MacArthur Foundation, Field Foundation, and the American Sociological Association.  As Director of IRRPP, she has co-authored a number of reports as part of the State of Racial Justice in Chicago project chronicling the experiences and conditions of racial/ethnic groups in the city.  Dr. Lewis lectures and consults regularly on issues of racial and educational equity and contemporary forms of racism.