We host a colloquium twice a month that brings in sociologists and other social scientists to discuss recent or ongoing projects. The series features scholars from UIC and around the country. A colloquium typically involves a research presentation or a panel of scholars followed by a lively Q&A.

Lunch with the Presenter 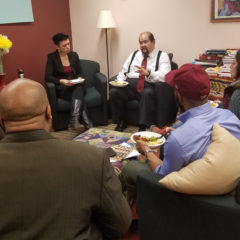 Graduate students in our department have the opportunity to get lunch with the colloquium presenter. This more intimate setting allows our graduate students to connect with leading scholars and ask specific questions about research and life as a scholar and professor.

“Following Questions Where They Lead” February 14, 2018

“The ‘Western Disease’: Epistemic Contestations over Autism in the Somali Diaspora” March 14, 2018

“The Church and the Streets: Black Sexual Minority Women in the Pre-Stonewall Era” April 11, 2018

“We Demand: The University and Student Protest” September 13, 2017

“Whites to the Front of the Line: Race and Sexual Preference on a Gay Hookup App” November 8, 2017